Comparison with Formula One car

A Champ Car is a single seater (commonly called open wheel) racing car. For much of their history Champ Cars have been similar to Formula One cars, although there have traditionally been several key differences between the two.

For many years Champ Cars were also called "Indy Cars" after the Indianapolis 500. However, since 1996 they have not run at the Indianapolis 500 as that race became part of the separate Indy Racing League which uses different specifications for its cars. The term IndyCar is now trademarked to the IRL in the United States, but Champ Car races in Australia and Canada continue to bear the Indy name.

As of 2005, Champ Car is the official name of the racing series that has been promoted as Bridgestone Presents The Champ Car World Series Powered by Ford since early 2003.

Champ Car, as a corporate entity, replaced CART in 2004 after Championship Auto Racing Teams Inc., a company headquartered in Indianapolis, Indiana, filed for bankruptcy. CART was founded in November 1978 by Roger Penske, Pat Patrick, Dan Gurney, and several other team owners who had been participating in USAC events involving cars known as Champ Cars and IndyCars. They oversaw the day-to-day business and sanctioning of Champ Car racing at locations that today include the United States, Canada, Mexico and Australia. The Champ Car organization runs the Champ Car World Series and the Toyota Atlantic Championship. Champ Car also operates the Trans-Am Series in a cooperative agreement with SCCA Pro Racing. 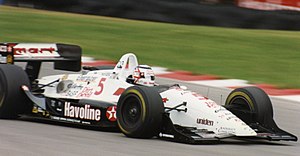 Nigel Mansell racing in a Champ Car in 1993

In 1909 the American Automobile Association (AAA) established the national driving championship and became the first sanctioning body for auto racing in the United States. In 1956, the United States Automobile Club (USAC) was founded to take over sanctioning from the AAA which ceased sanctioning auto racing in the general outrage over motor racing safety that followed the Pierre Levegh disaster at Le Mans Sarthe. USAC controlled the championship until 1979. In that year, CART began operating its own competing series, which quickly became dominant.

The split away from USAC in 1979 was spurred by a group of activist car owners who had grown disenchanted with what they saw as an inept sanctioning body. Complaining of poor promotion and small purses, this group coalesced around Dan Gurney, who, in early 1978, wrote what came to be known as the "Gurney White Paper", the blueprint for an organization called Championship Auto Racing Teams. Gurney took his inspiration from the improvements Bernie Ecclestone had forced on Formula 1 with his creation of the Formula One Constructors Association. The white paper called for the owners to form CART as an advocacy group to promote USAC's national championship, doing the job where the sanctioning body wouldn't. The group would also work to negotiate television rights and race purses, and ideally hold seats on USAC's governing body.

Gurney, joined by other leading team owners including Roger Penske and Pat Patrick, took their demands to USAC's board and were turned down flat. This rejection turned disenchantment into defiance. In 1979, the rebel team owners laid plans to run CART, their own racing series, competing with the established USAC National Championship. The new series quickly gained the support of the vast majority of USAC Champ Car team and track owners, with the only notable holdout being A.J. Foyt.

As the morning of March 11, 1979 dawned, the open-wheel landscape had been transformed. The formerly all-powerful USAC was left with a slim, hodge-podge schedule of seven races, while CART could lay claim to the sport's notable drivers and tracks—except Foyt and Indianapolis. On that day, CART—sanctioned then by the Sports Car Club of America—dropped the green flag on its very first race, the Arizona Republic/Jimmy Bryan 150 at Phoenix International Raceway. Gordon Johncock would claim the checkered flag, but it was Rick Mears who would go on to capture the inaugural CART championship. USAC's competing championship was dominated by Foyt, but it would be the last National Championship for both the driver and the sanctioning body, as USAC relented at the end of the season and folded its National Championship Trail.

Champ Car, like its predecessor USAC, was dominated by North American drivers the 1990s. Many road-racing stars, including Mario Andretti, Bobby Rahal, and Danny Sullivan found success in the then-PPG IndyCar World Series. After former F1 champion Emerson Fittipaldi won the series title in 1989, the floodgates of talented South American and European drivers began to open. These pilots discovered that competing in Champ Car could often be more lucrative than an average career in F1 and consequently there was an increased presence of non US drivers (from mainly F1 and the European Formula 3000).

The easy victory of world champion Nigel Mansell in 1993 highlighted the competitiveness of non-US drivers which some interpreted as superiority. This, combined with CART's move to include more road racing on the schedule, led to a split of the series after the 1995 season due to a dispute between egos at CART and Tony George, owner of the Indianapolis Motor Speedway. George went on to form a new racing series, the Indy Racing League (IRL), which initially included an- all oval schedule, all races on US soil and mostly American drivers.

In the early years of the split, CART seemed to be dominant. It controlled most of the races and most of the "name" drivers, while George's primary asset was Indianapolis Motor Speedway and its 500. The first IRL schedule consisted of only four races, including the 500, and most of the drivers, even in the Indy 500, were virtual unknowns. The only major mistake that CART made early on seemed to be its attempt to create a rival showcase event, the U.S. 500, at Michigan International Speedway on the same day as the Indy 500. This event proved a failure with regard to both live gate and television ratings and was soon moved and then discontinued.

In 2000\, CART designated the Vanderbilt Cup as its series championship trophy.

During the 2003 offseason, CART went bankrupt, and shares of the stock were worth only 25 cents. The assets of CART were liquidated and put up for sale. Tony George made a bid for the company in an attempt to bury the series once and for all, while a trio of CART owners (Gerald Forsythe, Paul Gentilozzi, and Kevin Kalkhoven), who had formed the OWRS (Open Wheel Racing Series), also made bids. In the end, a judge ruled that the OWRS group should be the purchaser of CART, which ensured a 25th anniversary season in 2004, running as Champ Car.

Today, there are still many questions about the future of the series, particularly whether or not it will continue the series' long-running tradition of American road races. In the past two seasons, several traditional circuit venues have been dropped in favor of street courses, which some fans view as counterproductive and damaging to the health of the sport. A dearth of noteworthy, name drivers has also hurt the series in its quest to recapture the popularity it held in the early 1990s. However, new owners Forsythe, Gentilozzi, and Kalkhoven have so far demonstrated a commitment to the series, notably expressed in their November 2004 purchase from Ford of the sole engine supplier, Cosworth Racing. While the owners may have no qualms about spending the money it will take to build Champ Car back up, whether their efforts will be successful or not is a question that can only be answered by time.

Champ Car officials have confirmed that Panoz will be the sole supplier of Champ Cars for three years from 2007. The Panoz DP01 will be built by sister company Elan Motorsports Technologies and will be powered by a turbo-charged Ford-Cosworth engine.

Rookies of the Year

Champ Car World Series Rookies of the Year: (2004 to present)