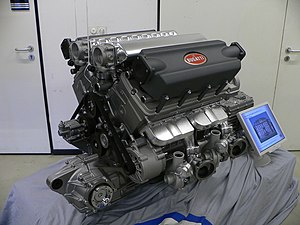 The Veyron 16.4 (known as the EB 16/4 Veyron in concept stages) is the most powerful and expensive car in the world. It reached full production in September 2005. The car is built by Volkswagen AG subsidiary, Bugatti Automobiles SAS at a production facility in Molsheim, France, and is sold under the legendary Bugatti marque. It is named for famed Bugatti racing driver, Pierre Veyron who won the 24 hours of Le Mans in 1939.

Development of the Veyron began with the 1999 EB 18/4 "Veyron" concept car. Introduced at the Tokyo Motor Show, it was similar in design and appearance to the final Veyron production car. One major difference was the EB 18/4's use of a W18 engine with three banks of six cylinders. The Veyron was designed by Hartmut Warkuss of Volkswagen rather than Giorgetto Giugiaro of ItalDesign who had handled the three prior Bugatti concepts.

VW chairman, Ferdinand Piëch, announced the production Veyron at the 2001 Geneva Motor Show. It was promised to be the fastest, most-powerful, and most-expensive car in history. Instead of the W18, the production model would use a VR6-style W16. First seen in the 1999 Bentley Hunaudières concept car, the W16 would get four turbochargers, producing an expected 1001 metric hp (736 kW). Top speed was promised at 406 km/h (252 mph), and pricing was announced at €1 million (US$1.3 million at the time).

Development continued throughout 2001 and the EB 16/4 Veyron was promoted to "advanced concept" status. In late 2001 Bugatti announced that the car, officially called the Bugatti Veyron 16.4, would go into production in 2003. The car experienced significant problems, however. High-speed stability was difficult, with one prototype destroyed in a crash and another spun out during a press demonstration at the Mazda Raceway at Laguna Seca. Production of the Veyron was delayed indefinitely.

Piëch retired that year as chairman of the Volkswagen Group and was replaced by Bernd Pischetsrieder. The new chairman promptly sent the Veyron back to the drawing board for major revisions. Neumann was replaced as Bugatti president by Thomas Bscher in December of 2003, and substantial modifications were made to the Veyron under the guidance of former VW engineer, Bugatti Engineering head Wolfgang Schreiber.

As of April 2005, the Veyron was expected to be released in the second half of 2005. Car and Driver visited the Bugatti factory in Molsheim in February 2005 and saw a number of cars in various stages of production, including at least one completed production model.

The Veyron features a W16 engine—16 cylinders in 4 banks of 4 cylinders, or two W8 engines mated together in line. Each cylinder has 4 valves, for a total of 64, but the narrow W8 configuration allows two camshafts to drive two banks of cylinders so only 4 camshafts are needed. The engine is fed by four turbochargers, and it displaces 8.0 L (7,993 cm³/488 in³) with a square 86 by 86 mm bore and stroke.

Putting this power to the ground is a dual-clutch DSG computer-controlled manual transmission with 7 gear ratios. The Veyron also features full-time all wheel drive, necessary given the output of the engine. Special Michelin PAX System run-flat tires, capable of running at 250 mph (402.3 km/h), are fitted.

The W16 produces 1001 metric horsepower, equivalent to 987 SAE net horsepower or 736 kW. This easily makes it the most powerful production road-car engine in history. Torque is 1250 N·m (922 ft·lbf). According to Volkswagen, the final production Veyron engine produces between 1020 and 1040 metric horsepower (1006 to 1026 SAE net hp), so the car will be advertised as producing "1001 horsepower" in both the US and European markets.

Top speed was initially promised to be 252 mph (406 km/h), but test versions were unstable at that speed, forcing a redesign of the aerodynamics. In May, 2005, a prototype Veyron tested at a Volkswagen track near Wolfsburg, Germany, and recorded a top speed of 248.5 mph (400 km/h). The production model has now been tested and reached a top speed of 407 km/h.

According to the UK magazine "Autocar", Volkswagen has officially unveiled the production version of the car (though the first units have yet to be offered for sale to the public) and published the final results of its in-house testing. The performance figures haven't yet been independently verified, if they are they will be unprecedented in a car from a major manufacturer.

The final curb-weight of the car is said to be 4,162 lb (1,888 kg) with the power output still at the 1,001 PS (736 kW) level originally promised. This is somewhat better power:weight ratio than was originally expected and may account for the increased performance figures over early prototype versions.

Bugatti plans to build 300 Veyrons over five years, the cars will be sold directly from the factory to customers but it will be possible to service them at Bentley dealerships.