From WOI Encyclopedia Italia
Jump to navigation Jump to search
File:Le Mans 1955 start.jpg
Start of the race, Levegh #20 car is in the center of the frame

The 1955 Le Mans disaster occurred during the 24 Hours of Le Mans when a race car crashed and flew into the crowd, killing over 80 people. Unlike many other races where the speed in curves is more important than top speed, top speed was a critical parameter for being competitive in Le Mans. This led to special body designs like the "Long Tail" bodies pioneered by Charles Deutsch and Robert Choulet. Braking at the end of the straight is also critical; the first use of disc brakes on a car was in a Jaguar racing in Le Mans. Mercedes-Benz still used drum-brake in 1955, but also used a special hood as an "air brake". 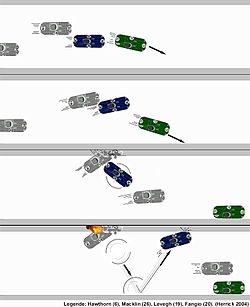 On June 11, 1955, Pierre Levegh was invited to drive a Mercedes-Benz 300 SLR after his excellent previous efforts. He was chasing Mike Hawthorn, when Hawthorn's Jaguar passed the slower Austin-Healey of Lance Macklin before suddenly braking and pulling over to the right to enter the pits. This forced the Austin-Healey to move over to the left, into the path of two faster Mercedes driven by Levegh and Juan Manuel Fangio, who was approaching at high speed.

Fangio, driving behind Levegh, narrowly escaped. Levegh did not have time to react, and his car ran into the sloped back of the Austin-Healey, was catapulted into the air, crashed on top of an earth bank designed to protect the crowd then landed near an enclosure where a group of spectators were before landing again near a grandstand where it exploded. The engine and other parts flew from the chassis and into the crowd. Levegh and 80 spectators were killed, while more than 100 others were injured. Large portions of the car were made of magnesium which then ignited intense fires, which, due to the nature of magnesium combustion, were only accelerated when water was used in an attempt to extinguish the flames.

The race was continued, officially in order to prevent departing spectators from crowding the roads and slowing down ambulances. By order from Stuttgart, the remaining Mercedes cars (driven by Fangio, Stirling Moss and others) were withdrawn from the race during the night as a sign of respect to the victims. Mike Hawthorn and the Jaguar team kept driving and won the race; they refused to take responsibility for the crash, and later were cleared of any wrongdoing.

In the shock following this disaster, many major and minor races were cancelled in 1955, like the Formula One Grand Prix races in Germany and Switzerland - the latter country banned circuit automobile racing, a ban which still remains in effect today.