The region covers 4,438 km² and has a population of about 300,000. In the region there are two ethnic minorities: the Molisan Croatians (2,500 people who speak an old dialect of the Croatian-Dalmatian language) and the Molisan Albanians (who speak an old dialect of the Albanian language which is now very different from the Albanian spoken on the other side of the Adriatic Sea). Molisan Albanians are generally of the Orthodox religion.

Many of the communities were damaged during the Second World War. Huge Allied land forces were based in Campobasso which was called "Maple Leaf City" by the Canadian troops. One ancient town which escaped the ravages of war is Larino. Its Centro Storico (Historic Centre) is one of the largest in south Italy. The town is preserved, in part, because it is on an outcropping of land surrounded by valleys where construction is strictly controlled by the municipal authorities. Restored following the recent earthquakes (2002), Larino presents an image of life in Molise as it was in the 18th and 19th centuries.

The Molise region is almost entirely constituted by small towns, scattered on the mountainous landscape. It has one of the oldest bell-making factories in the world. It's called Agnone and uses traditional methods to this very day.

The regional capital is Campobasso. The region is divided into two provinces: Campobasso and Isernia.

Other important cities include: Termoli, Venafro, Larino, Bojano (the ancient capitol of Samnium). 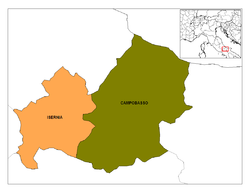