An ancient town, it is the seat of an archbishop, but is now mostly known as "the capital of engines", since the factories of most famous Italian car makers like De Tomaso, Ferrari, Lamborghini, Pagani, and Maserati are located there.

The University of Modena, founded in 1683 by Francis II d'Este, has traditional strengths in medicine and law. Italian officers are trained at the Italian Military Academy, located in Modena, and partly housed in the Baroque ducal palace, begun by Francis I in 1635 from the designs of Avanzini, and finished by Francis Ferdinand V. The Biblioteca Estense houses historical volumes and 3000 manuscripts.

Modena is the birthplace of the operatic tenor Luciano Pavarotti, and is also well known in culinary circles for its production of balsamic vinegar.

The territory around Modena (Roman Mutina, Etruscan Muoina) was inhabited by the Villanovans in the Iron Age, and later by Ligurian tribes, Etruscans, and the Gaulish Boii (the settlment itself being Etruscan). Although the exact date of its foundation is unknown, it is known that it was already in existence in the 3rd century BC, for in 218 BC, during Hannibal's invasion of Italy, the Boii revolted and laid siege to the city. Livy described it as a fortified citadel where Roman magistrates took shelter. The outcome of the siege is not known, but the city was most likely abandoned after Hannibal's arrival. Mutina was refounded as a Roman colony in 183 BC, to be used as a military base by Marcus Aemilius Lepidus, causing the Ligurians to sack it in AD 177. Nonetheless, it was rebuilt, and quickly became the most important centre in Cispadane Gaul, both because of its strategic importance and because it was on an important crossroads between Via Aemilia and the road going to Verona.

In the 1st century BC Mutina was besieged twice. First, by Pompey in 78 BC, where it was defended by Marcus Junius Brutus (a populist leader, not to be confused with one of Caesar's assassins). The city eventually surrendered out of hunger, and Brutus fled, only to be slain at Rhegium Lepidi. The city was once again besieged, this time by Mark Antony, in 44 BC, and defended by Decimus Junius Brutus. Octavian came to the rescue of Brutus, and with the help of the Senate, drove Antony away.

Cicero defined it Mutina splendidissima ("most beautiful Mutina") in his Philippics (44 BC). Until the 3rd century AD it kept its position as the most important city in the newly formed Aemilia, but the fall of the Empire brought Mutina down with it, as it was used as a military base both against the barbarians and in the civil wars. It is said that Mutina was never sacked by Attila, for a dense fog hid it (a miracle said to be provided by Saint Geminianus, bishop and patron of Modena), but it was eventually buried by a great flood in the 7th century and abandoned. 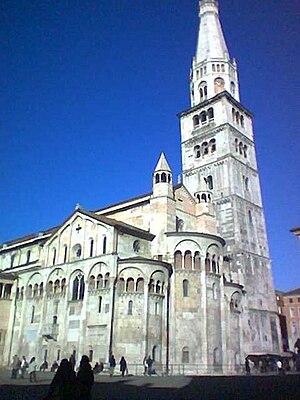 East end of the Romanesque Duomo with the Ghirlandina Tower

Its exiles founded a new city a few miles to the northwest, still represented by the village of Cittanova. About the end of the 9th century, Modena was restored and refortified by its bishop, Ludovicus.

The "Duomo" (cathedral) of Modena is a UNESCO World Heritage Site (illustration, right). Begun under the direction of the Countess Matilda of Tuscany with its first stone laid June 6, 1099 and its crypt ready for the city's patron, Saint Geminianus, and consecrated only six years later, the Duomo of Modena was finished in 1184. The building of a great cathedral in this flood-prone ravaged former center of Arianism was an act of urban renewal in itself, and an expression of the flood of piety that motivated the contemporary First Crusade. Unusually, the master builder's name, Lanfranco, was celebrated in his own day: the city's chronicler expressed the popular confidence in the master-mason from Como, Lanfranco: by God's mercy the man was found (inventus est vir). The sculptor Wiligelmus who directed the mason's yard was praised in the plaque that commemorated the founding. The program of the sculpture is not lost in a welter of detail: the wild dangerous universe of the exterior is mediated by the Biblical figures of the portals leading to the Christian world of the interior. In Wiligelmus' sculpure at Modena, the human body takes on a renewed physicality it had lost in the schematic symbolic figures of previous centuries. At the east end, triple apses express the articulation into nave and wide aisles (illustration, right) in bold and clear masses. Modena's Duomo inspired campaigns of cathedral and abbey building in emulation through the valley of the Po. The Gothic campanile (1224 - 1319) is called La Ghirlandina from the bronze garland surrounding the weathercock.

When it began to build its cathedral in 1099, the city was part of the possessions of the Countess Matilda of Tuscany; but by the time the edifice was consecrated by Pope Lucius III in 1184, it was a free commune. In the wars between Emperor Frederick II and Pope Gregory IX Modena sided with the emperor.

Other churches in Modena, the church of San Giovanni Decollato ("the Baptist Beheaded") contains a polychrome terracotta Pieta by Guido Mazzoni (1450-1518). The Baroque Este Pantheon (the church of S. Agostino, containing works of sculpture in honor of the house of Este) is by Bibbiena.

The Este in the duchy of Modena

The Este family were identified as lords of Modena from 1288 (Obizzo d'Este). After the death of Obizzo's successor (Azzo VIII, in 1308) the commune reasserted itself, but by 1336 the Este family was permanently in power: for Borso d'Este Modena was made a duchy. Enlarged and fortified by Ercole II, it was made the primary ducal residence when Ferrara, the main Este seat, fell to the Pope (1598). Francesco I d'Este (1629-1658) built the citadel and began the palace, which was largely embellished by Francesco II. In the 18th century Rinaldo d'Este (died in 1737) was twice driven from his city by French invasions, and Francesco III d'Este (1698-1780) built many many of Modena's public buildings, but the Este pictures were sold and wound up, many of them, in Dresden. Ercole III (1727-1803) died in exile at Treviso, having refused Napoleonic offers of compensation when Modena was made part of the Napoleonic Cispadane Republic. His only daughter, Maria Beatrice d'Este, married Ferdinand of Austria, son of Maria Theresa, and in 1814 their eldest son, Francis IV, Duke of Modena, received back the estates of the Este. Quickly, in 1816, he dismantled the fortifications that might well have been used against him and began Modena's unhappy years under Austrian rule, reactionary and despotic, using the Austrian army to put down a rebellion in 1830. His equally reactionary son Francis V, Duke of Modena, was temporarily expelled from Modena in the European Revolution of 1848, but was restored by Austrian troops. Ten years later, on August 20, 1859, the representatives of Modena declared their territory part of the Kingdom of Italy, a decision that was confirmed by the plebiscite of 1860.