Difference between revisions of "Lamborghini Murcielago"

The Lamborghini Murciélago is a GT and supercar automobile made by Automobili Lamborghini S.p.A. and designed by Luc Donckerwolke. It was introduced in 2002 as the successor to the Diablo. The body style is a two door, two seat coupé. To celebrate Lamborghini's 40th birthday, 50 special edition Murciélagos were built up during the autumn of 2003.

An open-top version called the Murciélago roadster was introduced in 2004 for the 2005 model year. The roadster features similar performance to the coupe with a more aggressive rear flank, as well as a considerably higher price tag.

The Murciélago sports a 6.2 L version of the legendary Lamborghini V12 engine, a six speed manual or six speed sequential gearbox and All Wheel Drive. It also has a rear spoiler that can be raised to an angle of 70 degrees, the side mirrors fold in to increase aerodynamics and side scoops that automatically open to the needed size to let in just the right amount of air needed to cool its engine. The name Murciélago comes from a bull that survived 24 sword strokes in an 1879 fight at the arena of Cordoba, and fought with such passion and spirit that the matador chose to spare its life, a rare honor. In another Lamborghini tie-in, the bull was later presented as a gift to Don Antonio Miura, a noted breeder, and went on to sire a line of famous fighting bulls. Murciélago also means bat in Spanish, and a Murciélago roadster is featured briefly in the movie Batman Begins. The coupe's base price is US$ 273,000, which is US$90,000 more than its smaller sibling, the Lamborghini Gallardo .

Lamborghini have announced two more powerful models, the XTR, a track-only car with a 700 bhp version of the V12, and the LP640 with 640 bhp. Although the XTR is not street legal the LP640 met the standards and is expected to be introduced in March of 2007. (link), going on sale spring this year.

The LP640 version was introduced at the Geneva Motor Show in March of 2006, as a facelift for the coupé version. It features a 6.5 L engine, now producing 640 bhp, improving performance substantially. Like the base Murciélago, the engine is mounted "backwards", with the gearbox at the very back of the car. It also, like the base spec. car features rear-biased All wheel drive. There were also a few minor external changes, primarily to the low air intakes.

The front and rear bumpers have been reshaped to channel air more efficiently and the new exhaust has been shaped into the rear diffuser to minimize aerodynamic lift. The air intake on the left side has been enlarged to accommodate the feeding of the oil cooler. The car's body is made up of steel and carbon fiber, while underneath a revised suspension has been added to keep up with the car's exceptional performance. It also has a four-wheel-drive system that normally distributes 70% of the torque to the back, but can allocate up to 100% to either end depending on where the grip is running out. There are also new 18-inch Hermera alloy wheels running huge 335/30 tires at the rear. The LP640 retains the original car's scissor-opening doors.

Inside the LP640, the seating has been reshaped to accommodate greater headroom, while an upgraded instrument panel is flanked by an improved stereo system.

The LP640's optional equipment includes ceramic brakes for swifter braking and a glass engine cover which shows off the LP640's 6.5-liter V12 engine.

The Murciélago LP640 Versace is a special edition of the LP640 that was first revealed at the 2006 Paris Motor Show. The twenty white cars feature two-tone black and white trim inside and out, with interiors finished in custom Versace leather, along with a Gianni Versace logo plaque. Lamborghini also presented a black LP640 Versace and a black LP640 Roadster Versace, each of which only one was produced.

It is a limited (50 units) version of upgraded Murciélago Roadsters. The engine is rated at 650 PS and 660 Nm, with 0-100 km/h in 3.4 seconds and top speed of 330 km/h. It includes a Grigio Telesto exterior with grey bodywork with Arancio bright orange highlights.

The interior includes a similar black and orange colour scheme, featuring asymmetric dash design, with black Alcantara Nera on the driver's side, including door panel and central tunnel, and black leather Nero Perseus on the passenger's side.

At the 2009 Geneva Motor Show, Lamborghini unveiled a new version of the Murciélago, the LP 670-4 SuperVeloce. The SV moniker had previously appeared on the 1995–99 Diablo SV, a highly tuned version of the car that appeared close to the end of the model's production run.

The SuperVeloce's V12 produces 670 PS at 8000 rpm and 660 Nm of torque at 6500 rpm, thanks to improved valve timing and intake system modifications. The car's weight was reduced by 100 kg by swapping several interior parts and exterior panels out for carbon fiber replacements, along with the installation of a new, lighter exhaust system. The LP670-4 SV comes standard with the LP640's optional six-piston caliper, 15-inch carbon-ceramic disc brakes, slowing black 18-inch wheels. In its June 2009 issue, Car and Driver magazine predicted that the LP 670-4 SV was capable of reaching 100 km/h from a standing start in just 3.2 seconds. Lamborghini claims the car can reach 342 km/h with an optional smaller spoiler, or 337 km/h with the standard Aeropack wing.

According to Maurizio Reggiani, head of Lamborghini R&D, the SuperVeloce's steering was tuned for high-speed sensitivity. Production of the top-of-the-line Murciélago was limited to 350 cars, priced far above the base LP640's sticker price, at €300,000, or $450,000.

Lamborghini V12 engine, with the Murciélago roadster in the background

LP stands for Longitudinale Posteriore, referring to the lengthways mounted, 6.5-liter V12 engine, capable of producing up to 640 bhp at 8,000 rpm. Along with a new six-speed gearbox, which can come in Lamborghini's optional paddle shift "E-gear" package, the LP640 can go from 0 to 100 km/h in just 3.4 seconds: 0.4 seconds quicker than the normal Murciélago. The LP640 is accommodated by an electronic launch-control device called "Thrust".

The Lamborghini Murciélago R-GT is a race-only version of the Murciélago, developed jointly with Reiter Engineering and Audi Sport. It has rear-wheel drive unlike the standard Murciélago to comply with the FIA, ACO, and JAF rules. The car retains the standard Murciélago V12, but has air restrictors to manage power. Its acceleration and top speed are highly dependent on the gearing selected for a particular race track.

In March 2007 in the FIA GT Championship, the All-Inkl.com Racing Murciélago won the Zhuhai 2 Hours.

In April 2009, in an LMS 1000 km de Catalunya race, a Murcielago R-GT of the Russian IPB Spartak Racing Team won the GT1 class, against a Corvette C6-R and a Saleen S7-R. The drivers of the IPB Spartak Racing car were the Russian Roman Rusinov and the Dutch Peter Kox. They crossed the finish line 2 laps ahead of the first Corvette, in 2nd place. Before of the race, Lamborghini has set the pole, but has been moved at the end of the grid due to some technical irregularities. The second international win for the Ragin Bull GT car.

It is a version of R-GT built for Super GT for Japanese Lamborghini Owners Club (JLOC).

In March 2006 at the Super GT Suzuka 500 km, R-GT recorded the first win ever for a Murcielago when they earned a win in the GT300 class.

The 2006 Miura Concept was based on a Murciélago chassis

A retro-styled Lamborghini Miura concept car was presented at the Museum of Television & Radio on January 5, 2006 alongside the Los Angeles Auto Show, though it was not present at the show itself. Instead, the Miura concept car officially debuted at the North American International Auto Show two weeks later. It was the first design to be penned by Lamborghini design chief, Walter de'Silva, commemorating the 40th anniversary of the 1966 Geneva introduction of the original Miura.

Lamborghini president and CEO Stefan Winkelmann denied that the concept would mark the Miura's return to production, saying “The Miura was a celebration of our history, but Lamborghini is about the future. Retro design is not what we are here for. So we won’t do the Miura.”

The Lamborghini Reventón is a highly modified version of the Murciélago. The car, featuring an upgraded interior and revamped exterior styling inspired by stealth fighters such as the F-22A Raptor, debuted at the 2007 Frankfurt Auto Show. Only 20 units were built. The car's mechanical underpinnings and engine are identical to those of the Murciélago LP640. A roadster version has also been produced. 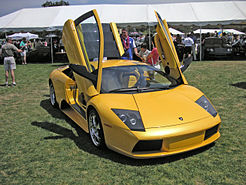 This is a PDF file, if you can't see it you need to activate your PDF reader; e.g.: (Adobe)