A De Lorean DMC-12 with its doors open 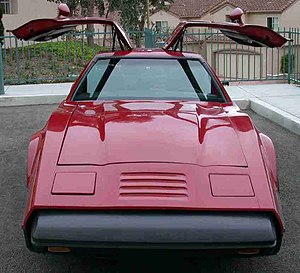 A Bricklin SV-1 with its doors open

A Mercedes-Benz 300SL Gullwing with its doors open

The term gull-wing door is an automotive industry term describing automobile doors which are hinged at the roof. They are so named because, when opened, the doors evoke the image of a seagull's wings.

Conventional car doors are typically hinged at the front-facing edge of the door and allow the door to swing outward from the body of the car.

Despite the common misconception that the gull-wing doors are mere stylistic affectations, the design is a very practical one. The advantage is that when properly designed and counterbalanced (for example, the De Lorean), they require little side-clearance to open (about 27.5 cm, or 11" in the De Lorean[1]) and allow much better entrance/egress than conventional doors. This is especially important for vehicles like the De Lorean whose width would make conventional doors awkward to use when the car is in a conventional urban parking space.

Gull-wing doors have a somewhat questionable reputation because of early examples like the Mercedes and the Bricklin. The 300 SL used the door design to allow an unusual chassis design which required a very high door sill and forced the doors to be smaller than would otherwise have been optimal. The Bricklin was a more conventional sized door but the actuation system was problematic in day-to-day use and led to unreliable operation. In addition, there was some concern that in making the door as light as possible, it couldn't provide adequate protection in side-impact accidents. There was, however, no indication that this concern was justified.

The De Lorean solved these problems by using a solid-steel torsion bar (supplied by Grumman Aircraft Engineering Corporation) to counterbalance a full-sized door and then used simple pneumatic struts similar to those found in hatchback cars to open the doors and dampen the movement of the doors.

Other disadvantages of the system were not so easy to address. For example, the gull-wing design makes creating a convertible version of the car virtually impossible since, for optimal efficiency, the hinges must be placed as close to the center of the car as possible. This was never a concern for the De Lorean since no convertible version was ever planned (though there were rumors of a four-door family car based on a front-engine chassis with room for four passengers).

It also makes sealing the car against water leaks more difficult because of the shape and movement path of the door itself. Many De Lorean owners report leakage when taking their vehicles through automated car-washes because of the high-pressure water jets, though in ordinary rainfall the seals were more than adequate.

In addition to the traditional gull-wing doors, there are other unusual door mechanisms - particularly among exotic and expensive cars. Lamborghini uses a design which is a hybrid of the conventional and gull-wing design which is generally referred to as a "scissor", "jack-knife" in which the door is still hinged at the front but swings upward from the car while staying parallel with the edge.

The McLaren F1 roadcar and Mercedes-Benz SLR use a variant of this system called Butterfly doors. The doors are hinged at the front similar the scissor doors but the hinges are placed higher up on the A-pillar, allowing the door to pivot both up and out. This increases the ability of the door to move out of the way of the car's occupants but does not prevent a convertible version. The Toyota Sera was a limited-release car designed exclusively for the Japanese market which used this design. Due to its unusual design, some enthusiasts in Australia, New Zealand and England have privately imported the cars. It is available only in right-hand drive configuration.

Koenigsegg uses a "dihedral synchro-helix" system for their vehicles which seems to combine the advantages of all the designs, though with considerably more mechanical complexity.

The BMW Z1 used a novel design in which its doors were not hinged at all but rather retracted vertically into the chassis, leaving an empty (though unusually high) sill.

The kit car Nova/Sterling [2] [3] also known as Purvis Eureka [4] in Australia used a special type of door, actually a lifting canopy, on several of their models where the entire top section of the car was opened. The Saab Aero-X used a similar design, but had doors as well.

The following is a (partial) list of production and kit automobiles with gull-wing and other unusual door designs: