Difference between revisions of "Ferrari P"

The Ferrari P series were prototype sports cars in the 1960s and early 1970s.

Although Enzo Ferrari resisted the move even with Cooper dominating F1, Ferrari began producing mid-engined racing cars in 1960 with the Ferrari Dino-V6-engine Formula 2 156, which would be turned into the Formula 1-winner of 1961.

Sports car racers followed in 1963. Although these cars shared their names (based on engine displacement) with road models, they were almost entirely dissimilar. The first Ferrari mid-engine in a road car did not arrive until the 1967 Dino, and it was 1971 before a Ferrari V12 was placed behind a road-going driver in the 365 GT4 BB.

The 250 P was a Prototype racer produced in 1963, winning the 12 Hours of Sebring, 24 Hours of Le Mans, and the manufacturers' championship. It was a mid-engined sports car racer with a 250 Testa Rossa V12 engine and almost entirely unrelated to the other 250 cars.

The 250 P evolved into a saleable mid-engined racer for the public, the 250 Le Mans. Introduced at Paris in November, 1963, the LM was successful for privately-entered racers around the world. Notably, a 250 LM entered by the North American Racing Team won the 1965 24 Hours of Le Mans driven by Jochen Rindt and Masten Gregory, which remains as Ferrari's last overall victory in the endurance classic. About 32 models were built in 1964 and 1965, with all but the first few powered by 3.3 L 320 hp (238 kW) engines, though the name did not change with the increase in displacement. A fully-independent double wishbone suspension was specified with rack and pinion steering and four wheel disc brakes. Ferrari had intended that the 250 LM be homological for racing as a Group 3 Grand Touring Car, however in April 1964 the FIA refused to do so as Ferrari had built considerably fewer than the required 100 units. The 250 LM thus had to run as a Prototype until it was homological as a Group 4 Sports Car for the 1966 season.

The 1966 330 P3 introduced fuel injection to the Ferrari stable. It also used a P3 (Type 593) transmission that was prone to failure and was replaced by a ZF Friedrichshafen AG transmission when the P3 were converted to 412P's, another Ferrari first that would only last one season when the ZF's were replaced by 603R P4 transmissions in the 412P's. 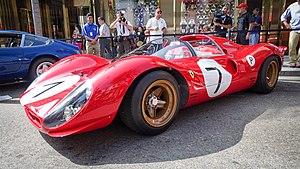 1967 was a banner year for the Enzo Ferrari motor company, as it saw the production of the mid-engined 330 P4,[1] a V12-engined endurance car intended to replace the previous year's 330 P3. Only four Ferrari P4-engined cars were ever made: three new 330 P4s and one ex P3 chassis (0846). Their three-valve cylinder head was modeled after those of Italian Grand Prix-winning Formula One cars. To this was added the same fuel injection system from the P3 for an output of up to 450 hp (335 kW).

The Ferrari 412P was a "consumer version" of the famous 330 P3 race car, built for independent teams like NART (0844), Scuderia Filipinetti (0848), Francorchamps (0850), and Maranello Concessionaires (0854). These cars had carburetor engines instead of the factory Lucas fuel injection. Surviving 412P cars are worth approximately 6 million nowadays.

The 330 P4 electrified the racing world when one P 3/4, one P4 and one 412P crossed the finish line together (in first, second, and third place) in the 1967 24 Hours of Daytona and became a symbol of victory over arch-enemy Ford GT40. Surprisingly the 330 P4 had poor aerodynamics even in comparison with its rivals, but its sexy looks continue to grab attention.

The original P4 cars are estimated to be worth about US$10 million each.

All of the P4's built are accounted for and P 3/4 0846 is surrounded in controversy. 0856 remains in its original state and is owned by a Canadian collector, 0858 was converted into a 350 Can Am and is owned by American Walter Medlin, and 0860 was also converted to a 350 Can Am but is presently wearing a P4 Spyder body and is in a French automobile museum. The fourth of the original cars, chassis number 0846, was originally built as a P3 by Ferrari but was modified in December 1966 to accept a P4 engine while retaining its P3 chassis and nose. This P3/4 was subsequently badly damaged in an accident at Le Mans and was discarded by Ferrari.

Recently, many components of P3/4 0846 appear to have resurfaced in the possession of exotic car collector and enthusiast James Glickenhaus, a former movie director and stock exchange magnate. Although both he and David Piper (from whom he acquired the car) thought it was one of four replica chassis constructed with the blessing of Enzo Ferrari in the late 1960s, it appears that nearly all of the tube frame chassis and some other components from the wrecked P3/4 were used in this car. This seeming discovery has stirred much controversy among Ferrari enthusiasts, and the Ferrari company is unable or unwilling to officially identify the car except to note that their records hold that it was "scrapped" "written off". This tube frame appears to be a P3 modified to hold a P4 engine, as was the case with 0846 exclusively, and the damage from two contemporary racing accidents appears in the frame as well. The car's transmission, engine heads, and steering rack also include the correct Le Mans scrutineering marks, linking them to P3 0846 and P 3/4 0846 of 1966 and 1967.

Due to its great fame and good looks, more than a hundred P4 replicas of various design have been built. A high-quality P4 replica built with genuine Ferrari engine (e.g. a 400i V12) may command as much as $200,000, but simpler ones (often with Rover engines and Renault drive-trains) may be sold for $50,000.

After boycotting sports cars racing in 1968 to protest the rule change, Ferrari built another 3000cc prototype in 1969, named the 312 P.

These were not designated with P as they were not built for the 3000cc Prototype category, but with S as 5000cc Sports cars, of which at least 25 had to be built. Porsche had made that investment in early 1969 with the new Porsche 917. Ferrari answered with the Ferrari 512 which was introduced for 1970, and later modified as 512 M.

In 1971, another rule change was announced for 1972, and Ferrari abandoned further development of the 512 in order to focus on a new 3L prototype based on the F1 car.

In 1972, this Ferrari 312PB with the flat boxer engine was very successful and won all races of the World Sportscar Championship in which it raced. Ferrari didn't enter the 24 Hours of Le Mans in 1972 though as the F1-based engine would not last for sure.

They had to enter in 1973, though, and finished second behind Matra, same as in the championship. At the end of the 1973 season, Ferrari abandoned sports car racing to focus on F1.

In 2005, James Glickenhaus commissioned Pininfarina to rebody an Enzo as a special one-off custom car. It is inspired by the early P racers, and especially Glickenhaus' own reconstructed P3/4. P4/5 Video