Difference between revisions of "Cagiva"

Cagiva is an Italian motorcycle manufacturer. It was founded in 1950 by Giovanni Castiglioni in Varese, originally producing small metal components. It went into the motorcycle industry in 1978. The name is a portmanteau derived from the founder and the founding location, i.e. CAstiglioni GIovanni VArese. In 1999 for strategic purposes, the company got restructured. MV Agusta Motor become the main brand comprising Cagiva and Husqvarna. The company currently operates under the name MV Agusta Motor S.p.A. but remains under the ownership of Giovanni's sons, Claudio and Gianfranco Castiglioni.

In 1978 Cagiva entered the motorcycle business with two racing motorcycles riden by Gianfranco Bonera and Marco Lucchinelli.In the same year they bought a factory in Schiranna, Varese from AMF-Harley Davidson and went into motorcycle production. By 1979 the company reached an annual production of 40000 motorbikes with 8 models with two-stroke engines ranging from 125cc to 350cc.

In 1983 Cagiva obtained Ducati four stroke engines from 350cc to 1000cc and entered the big displacement market. They bought Ducati in 1985 but kept the Ducati name that was better recognized outside Italy. Ducati motorcycle production continued in Bologna, while the Varese-built Cagiva Ala Azzurra (sold under the name "Alazzurra") and Elefant were introduced, both featuring Ducati engines.

Cagiva continued with strategic buyouts of Moto Morini in 1985 and Husqvarna in 1987. In 1991 Cagiva also bought the tratemarks for the MV Agusta brand

In 1999 for strategic purposes, the company got restructured. MV Agusta Motor become the main brand comprising Cagiva and Husqvarna.

In the early 80's Cagiva began to manufacture dirt bikes and started a massive public relations program with the opening of their North American branch. They hired "Radical" Ron Turner to test and develop their bikes. They also had Duane Summers, a legend in the cross country pro circuit. This was when Johnny O'Mara was the 'fast' one on the 125's that year and Ron beat Johnny numerous times at local Southern California tracks. Cagiva motocross bikes were characterized by their fast powerful engines and innovative features, such as the MX line that had only one spring in the front forks with one fork controlling dampening and the other spring.

In the early 1990s the company began campaigning the Grand Prix motorcycle racing circuit with Randy Mamola as their rider. They would also have some technical assistance from Yamaha. In 1991 they signed former world champion Eddie Lawson to their team. Lawson would claim their first victory when he won the 1992 Hungarian Grand Prix. John Kocinski would also win a Grand Prix on a Cagiva (the C594) and finishing third in the 1994 world championship.

In 1990 and 1994 Italian rider Edi Orioli won the famed Dakar Rally on a Cagiva.

The Cagiva, with its department CAGIVA CORSE Srl "has had an important competitions in the past, by Motorcycle, and Motocross competition from Dakar, the sector most Cagiva had the greatest success was undoubtedly in Dakar and Motocross, with many titles pilots and builders losers in motomondiale has suffered more, where he managed to win just tender.

An Elefant for the Dakar

The home debut in this championship in the far exhausting 1985 with the model 650 Elefant, led by Hubert Auriol which has left the team BMW, which won the title in'83, the bike is curated, designed and assisted in the race by Roberto Azzalin with his staff, the first year of participation, the Cagiva had hoped to reach third, but a mechanical breakdown has pushed to the eighth position.

The years following the motion of the dress livery Lucky Explorer, but the results are no better, again because of the withdrawals of the pilots, their disqualification or problems with the tires.

The turnaround is in 1990, when Edi Orioli wins his second Dakar (and the first for Cagiva). This year the bike had brought many innovations, from the engine 900 cc electronic injection; with this bike because you can not only win, but it brings two drivers on the podium in Italy, with Alessandro De Petri third place (which can win 5 stages) and the seventh of Arcarons (also winner of two special).

A year later, however, you can not repeat the incredible success of'90, with only the fifth place Arcarons, pentacampione while Cyril Neveu is found twenty-fifth because of electrical problems, but the following year, in'92, the Cagiva can placed second, third and fourth respectively with Laporte, Arcarons and Morales, while Orioli is found Troll seventh and tenth.

In 1994 the motion is processed by CH Racing: are applied Kehin carburettors and better suspensions. With this bike the Cagiva dominated the championship, ending with Orioli winner of the Dakar for the third time, after a hard fought struggle with Arcarons.

The following year, in'95, was introduced on GPS, the fight becomes more tight ends and Cagiva second and third respectively with Arcarons and Orioli, the Cagiva Dakar to participate in subsequent but you always will place between the sixth and seventh place, finally abandoning the race after the'97 edition.

The competitions in Motocross

The Cagiva came into this league as far back as'79, with motorcycle performance suffered, but the competition is still higher, especially the Suzuki, which dominated the World Motocross, the victories will come only in Class 125, reaching to touch on two occasions even in Class 250.

In the championship Cagiva 125 from the 1984 by Corrado Madii approaching drivers license, which is lost due to an accident and so it must be content with second position, in 1985 with Pekka Vehkonen and 1986 by Dave Strijbos are the winners of the title in the drivers seat to Cagiva WMX, instead of 1987 comes second losing the last race, while the house builders get the title in 1985, 1986 and 1987 with these victories, the Cagiva interrupts too many consecutive victories in both the Suzuki Manufacturers drivers (Cagiva being the second house to have won both Title pilots manufacturers).

In 250 league instead Cagiva makes good impression of himself by placing his pilot Pekka Vehkonen in second place of the World 1987 and 1988, always riding the WMX 250, but decided to withdraw from motocross races at the end of'88.

The Cagiva began his adventure in Motomondiale in 1977 in Class 250 and 350, the motion of buying Aermacchi Harley-Davidson, holders of three titles in the 250 class and one in 350, but is not a successful debut, with many mechanical problems and falls, as well as in the 79th.

The Cagiva in 1980 joined Class 500 with a motorcycle (1C2) hybrid-based Yamaha TZ 500, but the results still missing In 1981 will produce the 2C2 first real motorcycle Cagiva and from 1982 with the 3C2 are starting to see how a bike better, with Jon Ekerold (fresh world champion in Class 350 in 1980 to board a Bimota), it is possible to obtain the first ever for Cagiva, with a 10th place to Hockenheim (the last race of the season).

In 1983 with the new 4C3 you feel a particular frame, but makes the bike inguidabile and undermines the season in 1984, the motion can be developed 132 CV, but for a problem with the drivers, the only achievement in tenth place Grand Prix of Yugoslavia.

In 1985 the C10 adopts a V4 engine of 90 ° to the two crankshafts and counter-power to strip (instead of the rotating disc versions earlier), while the frame follows the pattern of Deltabox Yamaha official with the Cagiva this bike can take points, but can not conclude anything in the championship, for lack of pilots motivated, in fact the bike was tested with Kenny Roberts, showing good timing.

In 1987 the new bike, the C587, now completely red and ready during the fourth round of the World, the Grand Prix of Nations, it is shown immediately to the occasion, the new 4-cylinder has the V by 58 °, with the counter-shaft engine, frame, have a structure of type Deltabox but smaller than the previous year. In the Brazilian GP, De Radigues conclude in fourth place.

In 1988 theC588, which mounts tires Pirelli has a more streamlined engine, a reinforced frame and rear swingarm mounts a "banana" to allow d 'have the expansions of the cylinders prior to the same side. The pilot Randy Mamola But not like a little and only at the Italian GP we had a good result, with the 7th place. Subsequently Massimo Tamburini draws a fairing more streamlined, sealed type (novelty) that improves the competitiveness of the bike, the season continues with the third place in Belgium a Spa (first podium for Cagiva), in the rain, the fourth in Yugoslavia and the sixth in France in Paul Ricard.

In 1989 is presentedC589lighter and powerful. Probably the wrong weight distribution and the atypical horizontal mounting of the rear monoammortizzatore however disrupt the skills thus preventing traction to download Mamola ground all the horses, so the season is no. In 1990, theC590falls several times and the season is not even raised by the new technique, shown at the Grand Prix of Czechoslovakia, aC590frame swingarm, and carbon fiber.

In 1991 team arrived in Eddie Lawson, which increases the bike, winning the 6th place overall in the general classification and in 1992 realizes the dream of Cagiva, with the first victory in motomondiale, in Hungary, but the champion withdrew from motorcycling competitions that year, in 1993 the Cagiva is always a protagonist with the V593 and Champion United States Grand Prix a Laguna Seca by John Kocinski (hired at the end stagioe) in 1994 with C594 is even better (making it the most exciting season), with John Kocinski climbs on the podium seven times, won the Australian Grand Prix and won the third place in overall standings.

The Cagiva will retire at the beginning of '95 motomondiale after the Italian Grand Prix, with a sports career consists of 3 wins, 11 podiums, 6 pole position and 3 fastest laps in the race. 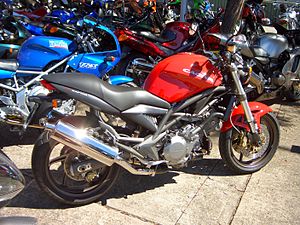