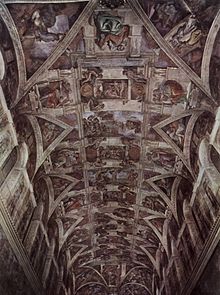 The Sistine Chapel ceiling in Rome painted by Michelangelo, one of the most famous examples of Italian art

Italian art describes the visual arts in Italy from ancient times to the present. In Ancient Rome, Italy was a centre for art and architecture. There were many Italian artists during the Gothic and Medieval periods, and the arts flourished during the Italian Renaissance. Later styles in Italy included Mannerism, Baroque and Rococo. Futurism developed in Italy in the 20th century.

Etruscan bronze figures and terra-cotta funerary reliefs include examples of a vigorous northern Italian tradition which had waned by the time Rome began building her empire on the Italian peninsula.

Aldobrandini Wedding (1st century BC) from the Vatican

The Roman period, as we know it, begins after the Punic Wars and the subsequent invasion of the Greek cities of the Mediterranean. The Hellenistic styles then current in Greek civilization were adopted.

The cultic and decorative use of sculpture and pictorial mosaic survive in the ruins of both temples and villas.

With the fall of its western capitol, the Roman empire continued for another 1000 years under the leadership of Constantinople. Byzantine artisans were used in important projects throughout Italy, and Byzantine styles of painting can be found up through the 14th Century.

The Gothic period marks a transition from the medieval to the Renaissance and is characterised by the styles and attitudes nurtured by the influence of the Dominican and Franciscan order of monks, founded by Saint Dominic (1170 to 1221) and Saint Francis of Assisi (1181 to 1226) respectively.

It was a time of religious disputes within the church. The Franciscans and Dominicans were founded as an attempt to address these disputes and bring the Roman Catholic church back to basics. The early days of the Franciscans are remembered especially for the compassion of Saint Francis, while the Dominicans are remembered as the order most responsible for the beginnings of the Inquisition.

The earliest important monument of the Italian Gothic style is the great church at Assisi. The Basilica of San Francesco d'Assisi (St Francis) is a World Heritage Site. The Franciscan monastery and the lower and upper church (Basilica inferiore e superiore) of St Francis were begun immediately after his canonization in 1228, and completed 1253. The lower church has frescos by Cimabue and Giotto di Bondone. In the Upper church are frescos of scenes in the life of St Francis by Giotto and his circle.

Cenni di Petro (Giovanni) Cimabue (c.1240-1302} and Giotto di Bondone (better known as just Giotto) (1267-1337), were two of the first painters who began to move toward the role of the artist as a creative individual, rather than a mere copier of traditional forms. They began to take an interest in improving the depiction of the figure. The Byzantine style was unrealistic and could be improved upon by a return to forms achieved in ancient Greece.

Other terms sometimes applied to describe the artists of this period are The Primitives and the Early Renaissance. 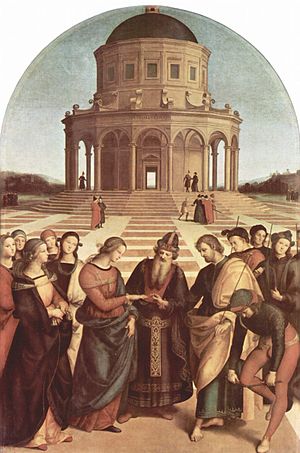 The Renaissance is said to have begun in 14th century Italy. The rediscovery of Ancient Greek and Roman art and classics brought better proportions, perspective and use of lighting in art. Wealthy families, such as the Medicis, and the papacy served as patrons for many Italian artists, including Leonardo da Vinci, Michelangelo Buonarroti, Donatello, and Raphael.

The focus of most art remained religious. Michelangelo painted the Sistine Chapel, and sculpted his famous Pietà. Leonardo painted the Mona Lisa and The Last Supper. Raphael painted several Madonnas. Both Michelangelo and Donatello sculpted visions of David. 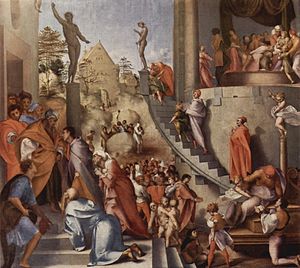 Joseph in Egypt by Pontormo

As the Renaissance had moved from formulaic depiction to a more natural observation of the figure, light and perspective, so the subsequent, Mannerist, period is marked by a move to forms conceived in the mind. Once the ideals of the Renaissance had had their effect artists such as Giulio Romano (ca 1499? to 1546) were able to introduce personal elements of subjectivity to their interpretation of visual forms. The perfection of perspective, light and realistic human figures can be thought of as impossible to improve upon unless another factor is included in the image, namely the factor of how the artist feels about the image. This emotional content in Mannerism is also the beginnings of a movement which would eventually, much later, become Expressionism in the 19th century. The difference between Mannerism and Expressionism is really a matter of degree.

Guilo Romano was a student an protege of Raphael. Other Italian Mannerist painters included Pontormo and Rosso Fiorentino, students of Andrea del Sarto. The Spanish Mannerist El Greco was a student of the Italian Renaissance painter Titian.

The most famous Italian painter of the Mannerist style and period is Tintoretto (Jacopo Robusti) (1518-1594).

From Mannerism onward there are more and more art movements representing tides of opinion pushing in various different directions, causing art philosophy over the centuries from about the 16th century onward to gradually fragment into the characteristic isms of Modern art.

The work of Michelangelo Merisi da Caravaggio sometimes simply called Caravaggio (1571-1610) stands on its own as one of the most original and influential artists who ever lived. He did something completely controversial and new. He painted figures, even those of classical or religious themes, in contemporary clothing or as ordinary living men and women. This in stark opposition to the usual trend of the time to idealise the religious or classical figure. Caravaggio set the style for many years to come, although not everyone followed his example. Some, like Agostino Carracci (or Caracci) (1557 to 1602) and his brothers were all influenced by Caravaggio but leaned toward the idealism and spirituality from which Caravaggio was perceived to have strayed.

A movement to reform Mannerism, Italian Baroque art saw Mannerism as excessive and tried to bring it back to Christian piety. Nevertheless, this reform took place within the context of the Mannerist attempt to introduce more movement and passion and is part of a conceptual dialogue with Mannerism.

Rococo was the tail end of the Baroque period, mainly in France of the 18th century. The main artist of the Rococo style in Italy was Giovanni Battista Tiepolo (1696 to 1770).

Italy produced its own form of Impressionism, the Macchiaioli artists, who were actually there first, before the more famous Impressionists.

The great Italian Expressionist was Amedeo Modigliani (1884 to 1920).

Across all forms of art, architecture, literature, painting etc. new approaches were taken. Futurism was the Italian movement contemporaneous with Cubism. Futurism was started by the poet Filippo Tommaso Marinetti in 1909. Marietti influenced Italian painters and suggested that the paintings seen in Parisian Cubist exhibitions were examples of the direction Italian painters should be taking. The most famous Italian Cubist/Futrist painter was Gino Severini (1883-1966). As Cubism attempted to modernise perspective representation by adopting not one but several points of view, so Futurism attempted to modernise all the arts and imbue them with force and dynamism by multiple methods. The Futurists loved movement and dance. The Futurists were also great enthusiasts of science and machines. Their love of machines was mercilessly parodied by the Dadaists. Much of Dada's style and methods came originally from subverting Futurism.

Giorgio de Chirico (1888-1978) was the Italian painter who founded the Metaphysical school of painting and was an enormous influence upon the Surrealists.

Classical Modernism of the 20th Century

At the beginning of the 20th Century, Italian sculptors and painters joined the rest of Western Europe in the revitalization of a simpler, more vigorous, less sentimental Classical tradition,that was applied in liturgical as well as decorative and political settings. The leading sculptors included: Libero Andreotti, Arturo Martini, Giacomo Manzu, Emilio Greco, and Lello Scorzelli. Leading painters included Pietro Annigone.

Post-Modernism is a highly controversial label which generally refers to a period of time after the project(s) of modernism have ended and in which all time periods and styles are not necessarily separated anymore. Just as paints of different colours can be mixed on a palette, so all the styles of antiquity, gothic, renaissance, baroque, expressionist, cubist, surrealist etc. can all be merged and produce hybrids which access and are informed by all the knowledge of art history. Nothing is positively forbidden. Even Bad art and Kitsch are part of the vocabulary employed to question the Metanarratives of art (and world) philosophy.

A good example of Italian Post-Modern painting is that of Carlo Maria Mariani.